Nothing says comfort like these Savory Mushroom Spinach Hand Pies with a Cheddar Crust. Whether you're cooking for a group on thanksgiving, or making lunch, these cute hand-pies are tasty on their own, as a snack, or even with some hot soup. 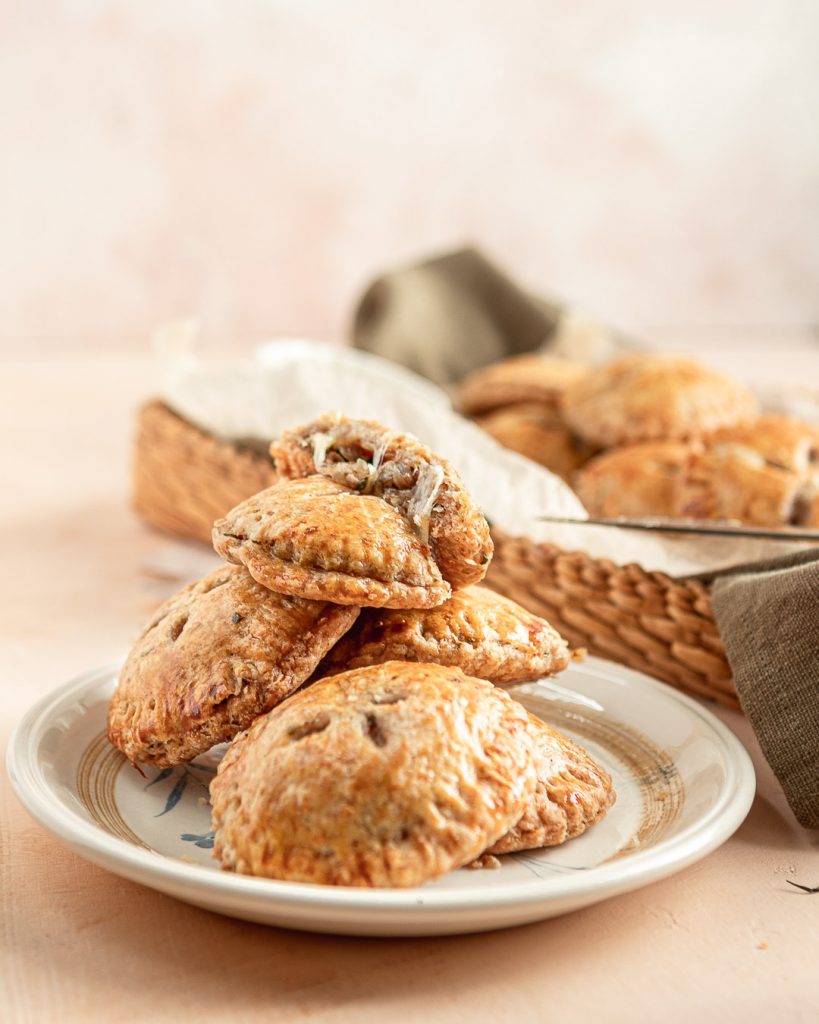 What are Savory Mushroom Spinach Hand pies with a cheddar crust?

Imagine a a savory quiche all packed up in  "hot-pocket size" that fits into your mouth in one delicious bite. These savory mushroom spinach hand pies with cheddar crust are filled with simmered mushrooms and spinach, carmelized onions, and topped with gruyere cheese. Baked to a golden crispy perfection in a flaky pie-like crust with hints of sharp cheddar. JUST DELICIOUS! On many occasions, I've made an extra big batch to freeze, so whenever I need something to go with soup, I just pop a couple into the oven. 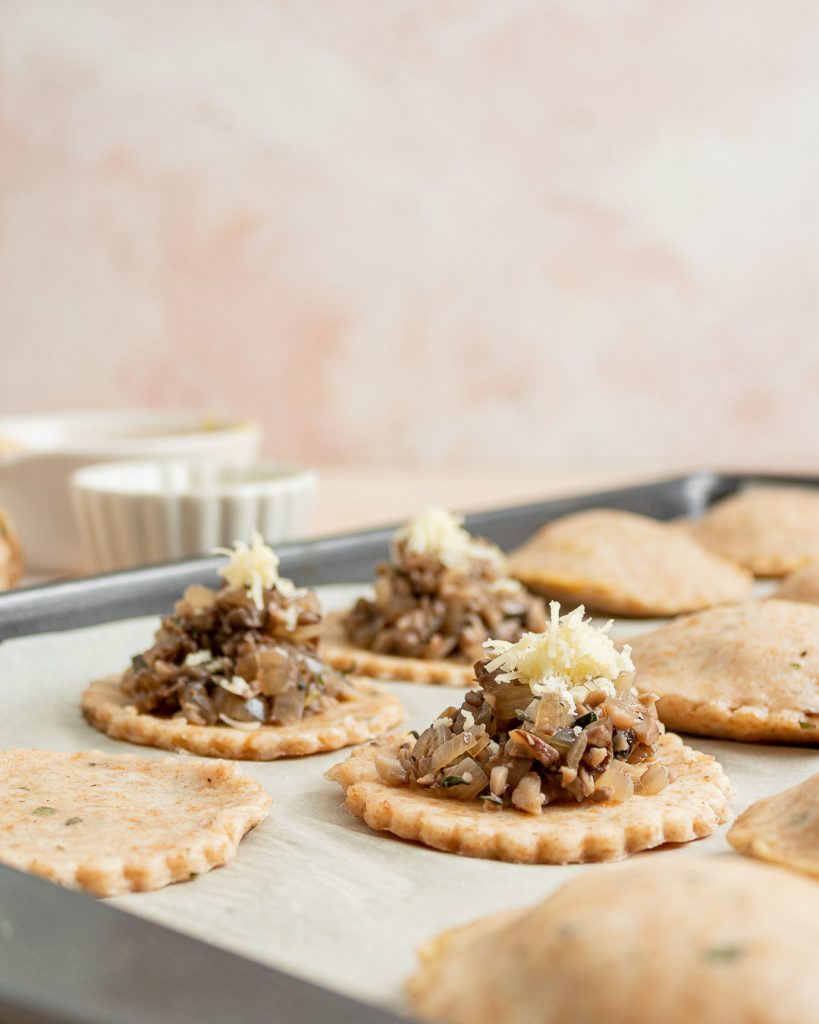 What Ingredients do I need for these savory mushroom spinach Hand Pies?

This recipe is very forgiving. If you don't have gruyere cheese, you can sub for swiss, cheddar etc. I wouldn't try to make these without mushroom though, as they are the star, but feel free to add some bacon or other veggies!

for the cheddar crust

Whole Wheat flour: I love the nutty flavor, wheat /spelt flour adds. If you want all/no wheat, just make sure you get the final amount needed.

*I have yet to try this with non-gluten flours, so I'm not sure how it will affect the outcome. If you have a go-to gluten-free pie crust recipe, feel free to use that instead!

Butter: Crucial for getting a crispy flaky crust (Can be subbed with vegan/dairy-free butter).

Apple Cidar Vinegar: My secret ingredient! This makes the pie dough really smooth to roll out and prevents cracking.

Egg (optional): I love adding egg to my pie-crust since it boosts the richness of the butter, but its not necessary for the success of these pies.

Mushrooms: I use Cremini mushrooms, but you're welcome to use button, chanterelle etc..

Yellow Onion: Carmelized onions are THE BEST, so don't skip out on this!

Spinach: Makes sure to fully cook this down, as any water in the filling will make the pies soggy.

Cheddar Cheese: I use smoke cheddar for a little extra "something" in the filling and the crust, but you're welcome to sub this for what you have.

Thyme & Oregano: Adding these herbs into the filling instantly elevates the flavor. In this case, I think dried works best. 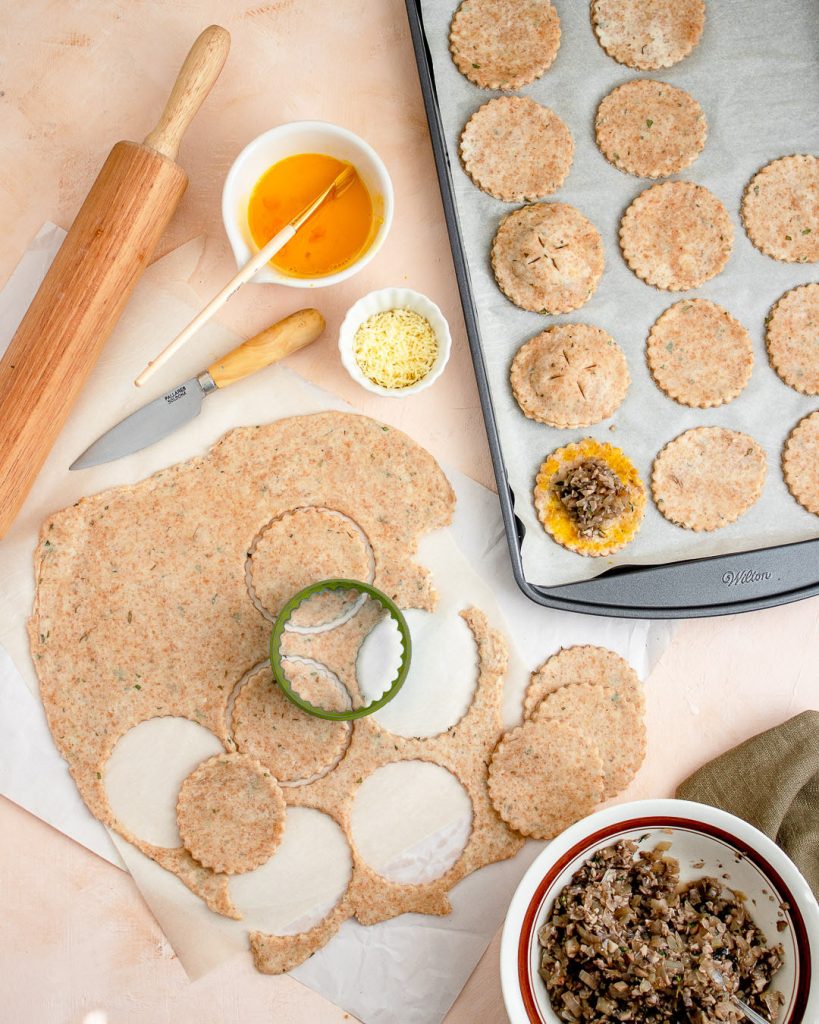 1. Make the crust: combine the flours, butter, apple cidar vinegar, egg (if using), cheddar, and water. Knead the dough slightly until it sticks together then form into a flat disc, wrap and let chill. It's super important to let pie crust chill before using so the gluten rests, and the butter solidifies.

2. Caramelize onion: While the dough chills, make the filling by sautéing the onions until translucent. Add a 3 teaspoons of water, cover and let the onions slowly caramelize stirring occasionally to make sure they don't burn.

3. Make filling: In another pan, sauté the diced mushrooms, until significantly reduced in size and slightly browned. Add in the chopped spinach, and cook down until wilted and all of its excess water is released. Strain out all the water. Press the mixture into the strainer to really get out all the juices. Toss the cooked mushroom/spinach mixture with the caramelized onions. Season with thyme oregano, salt and pepper.

NOTE: Let it cool before assembling, or it may melt the pie dough. 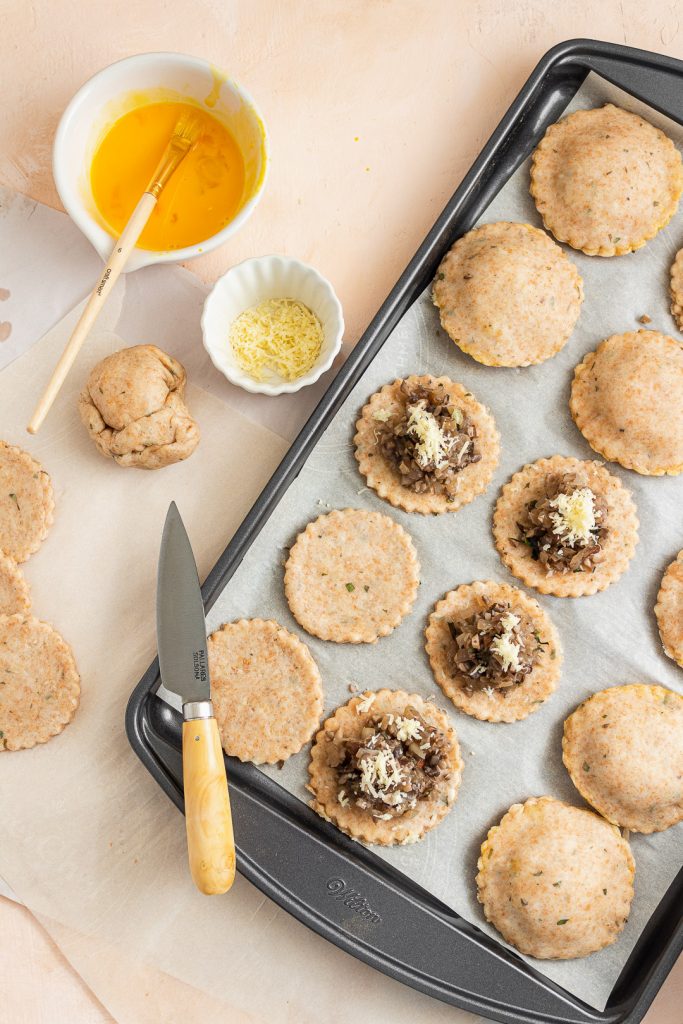 4. Roll out the pie dough: Remove the pie dough from the fridge, and lightly dust your surface and rolling pin with flour. Roll out the dough until it is ¼ inch thick. Using a 3" round cutter (you can up or down a size) cut out 24 circles. Press together any excess dough, roll-out, and cut out more circles.

5. Assemble Hand Pies: Place the cut-out pie crusts on a baking tray lined with parchment paper. Spoon the filling onto one pie crust round leaving at least a ¼ inch border. Top with more grated cheese, before lightly brushing egg wash around the rim. Seal the pie with another cut-put disc, and press the edges with the tines of a fork to seal. Slice 3 -4 vents on the top of the pie so the steam can escape. Repeat until all the pies are made!

6. Bake: In a preheated 425°F oven, bake the pies until nicely golden brown, and puffed up in size. Let the savory mushroom spinach hand pies with cheddar crust cool before enjoying! 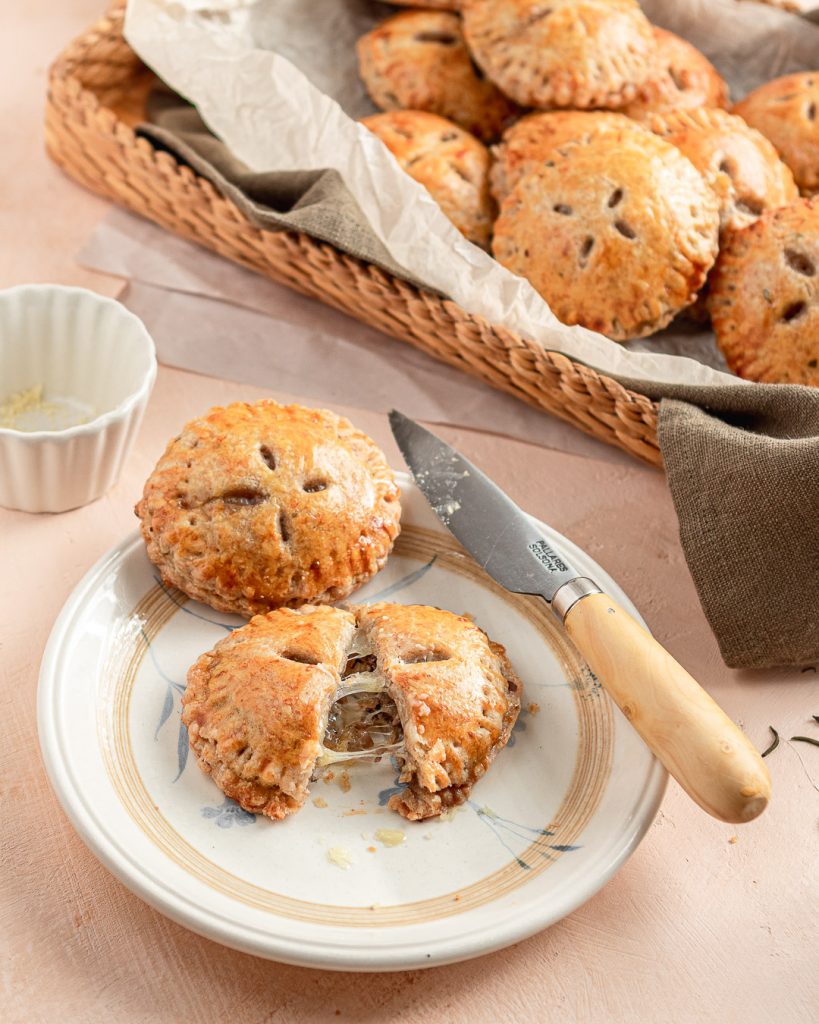 How to store hand pies

These hand-pies were are perfect for stashing in the freezer. Make and assemble as instructed, then instead of baking freeze on a baking tray until hardened. Then store in an air-tight container or reusable food bag.

These keep frozen raw for up to two months. When you're ready to enjoy, brush with egg wash, and bake at instructed temperature. Once baked, these savory hand pies last for 1 week when stored in a sealed container.

I hope you and your loved ones enjoy these savory mushroom hand pies with cheddar crust as much as I do! These are so simply to make, and you can really add anything to them: bacon, peppers, JUST cheese, the options are endless! 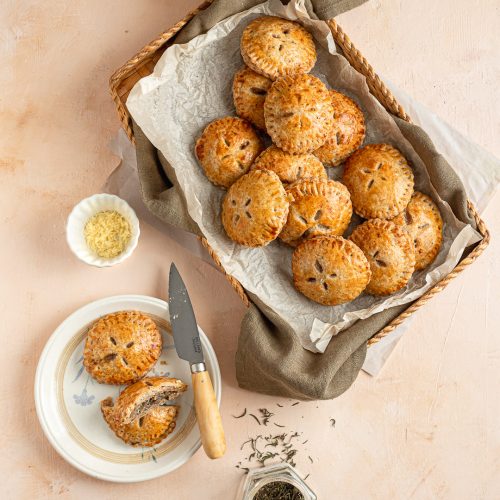 for the cheddar pie crust

for the savory filling

for the cheddar pie crust

Did you make this recipe?

Looking for more pies? What about... 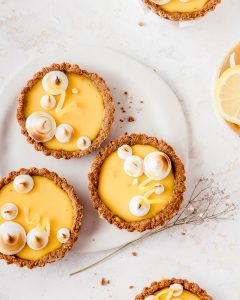 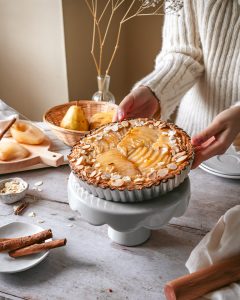 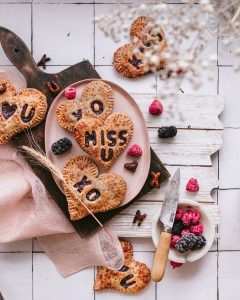 I'm Sharon, welcome to my creative corner where I combine my love of food with travel and art! Here I share elegant seasonal desserts and provide resources to help other food photographers & bloggers cultivate their craft. Dig deeper →

What readers are loving! 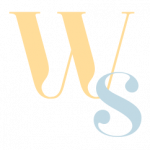 About | Recipes | Photography Resources | Travel Guides | Work with Me | Shop

Whiskfully so is for dreamers, believers, and do-ers -

for those with a passion for decadent recipes and telling stories through food photography.